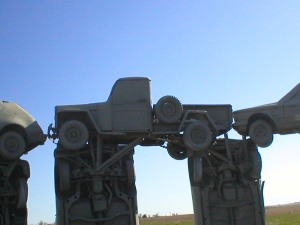 I took this photo at “Carhenge” in Nebraska, when my college roommate and I took a super-touristy road trip from Portland, OR to Kalamazoo, MI

I’ve had my current truck since I was 17. I’m 25 now. I loved my truck in high school and college (though I did leave him at home for the first three years). Even my first year out of school when I had to get three new tire changes because I kept running over curbs. After all, that wasn’t the truck’s fault.

Then two years ago, I had some major repairs and ended up financing about $1000, and making some more repairs for $400 a couple months later.

Then this January, I needed a new fuel pump and a few other repairs, which added up to $1200.

Right after that, the service engine light came on again.

That pretty much made me stop loving my truck.

So, I’m saving up for a new vehicle. I don’t need anything super fancy, but I have some standards. Here they are, for you to judge and amuse. END_OF_DOCUMENT_TOKEN_TO_BE_REPLACED

So, Freddie got back at me for killing his tire and for not seeing why the service engine soon light popped on yet. He stole my keys during my lunch break today. So I had to call my mom and have her bring the spare key after work. Luckily, unlike the last time I locked my keys in my truck (3 whole weeks ago), mom got off work before me, so I didn’t have to wait for her.

So I guess this is Freddie telling me something. What do you think it is?

So, I was going through my old writings yesterday to find some inspiration, and I found a piece I wrote a while back from the perspective of my truck. I figured it was the perfect time to post this (with some revisions) since I ran over a curb Saturday, causing me to need a new tire for the third time since November. Anyway, without further ado, Freddie’s Rant. (To see the history behind Freddie’s name, see Car History part 3: Freddie)

Well, she’s done it again. Here I am, a beautiful blue truck, and I’m stuck sitting outside on the curb for half a day without a tire. Just because she can’t pay attention when she’s making turns. I mean, first she kills my front right tire by hitting it on the curb at home all the time. Then she just wears down the front left. Honestly, that one probably wasn’t completely her fault. The tire was getting a bit old. But this time was completely her fault. That was the third curb she hit with the right rear tire in less than a week. Learn some depth perception girl!

But I’m sure it’s not even depth perception. She just doesn’t pay attention. I mean, if I had to count how many times she slams on her brakes, I would be able to count a lot higher. If she would just drive a bit less recklessly, I wouldn’t have to sleep so much in my downtime. I could flirt with the neighbor trucks. I could have time to share stories of our adventures. As it is, she is making me old, fast. Is it time to retire yet?

Maggie pushed her way through the gusting air back to her truck. The sand-colored vehicle stared at her as if to say “what took you so long? I’ve been waiting forEVER”

“Hush, you silly truck. I was only gone for a minute. You’d rather me pee in there than in you, wouldn’t you?”

Sandy just looked at her disapprovingly.

Maggie sighed and turned the key in the door.

After situating all of her possessions so that she could drive without something falling on her and could almost see out of her rear view mirrors, Maggie backed Sandy out of the gas station parking lot and started out on the road again. Moving cross country was so far not the adventure she had imagined.

As she waited at the turnoff for the freeway, a movement caught her eye. Off to the side, a plastic bag was drifting along, moving faster than the cars on the on-ramp. She had seen garbage on the side of the road for the whole trip. People’s inconsideration was really pissing her off.

Once on the freeway, Maggie unwrapped the sandwich she had bought at the pit stop and cranked up the radio. At least she had good company on this solitary roadtrip.

A yellow sticky note caught on the wind soared past her windshield.

After the traumatic experience of watching my car burn to a crisp on the side of the road, it’s a wonder that I wanted to drive again at all. But I still needed to get places, and an automobile seemed a lot more convenient than a bike or just walking everywhere.
And so the search for an affordable vehicle began again.

This time less than a month passed before I heard from my mechanic. He was actually looking to sell one of his personal vehicles, since his wife was tired of having seven cars and trucks lying around the place. He had a nice little GMC truck, would I be interested? I went to check it out, and instantly fell in love. The truck was a beautiful light blue. He was perfect.

Dale warned me that the truck had a four-cylinder engine and was a bit wimpy, so I shouldn’t rush intersections while I had the air conditioning on. My friend Sydney took me to get my truck and get the appropriate paperwork filled out. We decided right then that my truck needed a name.

“OMG He’s Gay!” Sydney exclaimed! “His name should be Lance! After Lance Bass, because he’s pretty AND gay! And Lancelot, cause knights are awesome!” It was decided.

Later, I told my mom, and she was skeptical. “Lance?” That doesn’t sound like a name you’d choose.”

“Well, I thought about Freddie for a second… but Lance is perfect. But Freddie could be after Freddie Mercury! and Freddie Prinze Jr! One is gay and the other pretty! hmm… Oh! I know, I’ll call him Frederick Lancelot the Third! Since he’s my third vehicle. He can be Freddie or Lance for short depending on my mood.”

A beautiful friendship has blossomed between Freddie and I since. In the past six years he had become dented, but they scars just add character to his beautiful blue exterior. He has transported me safely on many roadtrips, and in return I have tried to take care of him best as I can.

“Hopefully he doesn’t succumb to a fiery death like Thelma” I tell Beth and Katy one night at our favorite coffee shop.

“No, that’s been done. Freddie is doomed to drown! You better learn what to do when your car is submerged in water! or if you’re caught in an avalanche!”

And so I have.

One good thing about the period where I hadn’t had my car was that I made really good friends with my co-workers. School was closer to work than my house, so I would usually walk there straight from school if I worked, which put me there an hour early. So I hung out in the lobby and joked around with whoever was working. But on days when I worked later, or on weekends, I still had to walk. It was a cold winter. I ended up being sick almost all of January, and missing out on some shifts because of it. That was not helping my car fund.

Finally, in April, my mechanic called. He knew we were looking for a car, and one of his customers was looking to sell his. I was excited beyond belief. I was getting a car! It was another Oldsmobile, a white LSS. Dale, my mechanic, checked it out for me and made sure it was in good condition before we bought it. I had to make some payments, because the insurance money wasn’t enough to cover it, but it was the best deal we were going to get. Once again, I had a car.

I named her Thelma, because she was an old lady. I had not seen Thelma and Louise, but I had heard of it, and I thought Thelma was the perfect name for my car. Unfortunately, that gave her a horrible fate. END_OF_DOCUMENT_TOKEN_TO_BE_REPLACED 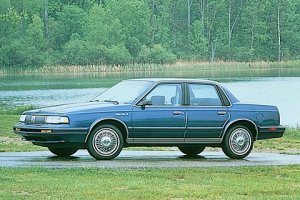 One of my favorite stories to tell is my car history. My truck is very dear to me, and how I came to get him is quite an entertaining story. So, I’ve decided to relate the story in 3 parts, one for each car that I’ve owned. So I hope you have some popcorn and possibly a tissue box (ok, you probably won’t need one, but I did at the time.) Here’s part one; Come back the next two days for the rest of the story.

Like every teenager, I couldn’t wait to get my driver’s license and a car. Getting a car meant freedom. It also meant I had to get a job. But before I could even start to worry about that, I had to learn to drive. END_OF_DOCUMENT_TOKEN_TO_BE_REPLACED