Design A Wine Cellar You’ll Love as Much as Your Wine! 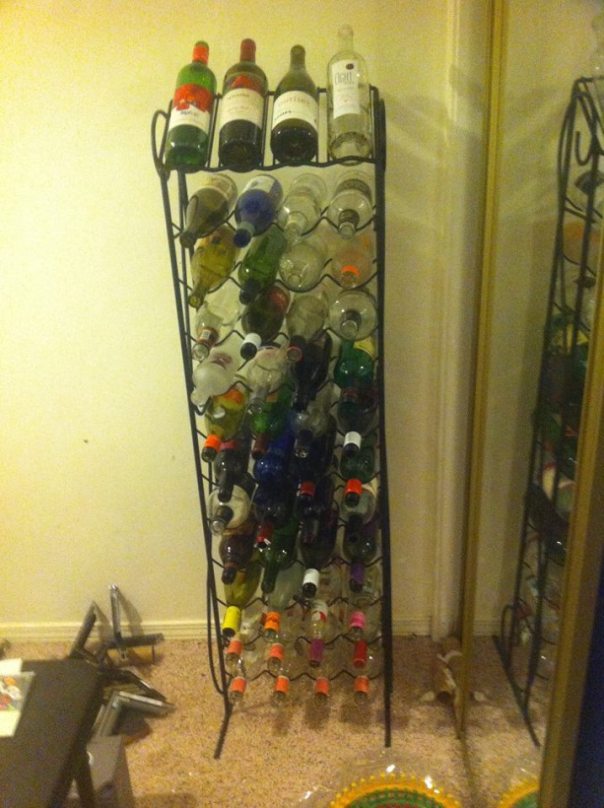 If you’re like me, you have a growing collection of wine bottles! Mine is mostly empty bottles that I use to make my lamps, but I’m thinking about getting a wine rack for wine that hasn’t been drunk yet as well.

If you’re looking for tips on wine storage design, check out this article I wrote for the Ben Franks Wine Blog. There are some fun facts about aging wine that you might not have known!

I woke up today alert and glad to be alive.

I still snoozed for half an hour though.

Then I snuggled in my bed with my computer for five more minutes until I absolutely had to get ready for work.

For dinner was my mom’s perfected sausage potato soup recipe. it’s a yummy corn chowder and is the ultimate comfort food. Mom and I had Smirnoff screwdrivers (I was in the mood for “chick booze”) as we prepped dinner. Then we watched tv, got dishes done, and I was snuggled up again by 8:30.

It was a good day.

Tomorrow I get sausage potato soup leftovers for lunch. Man am I lucky.

Party in a Pack of Pabst

“Duuuudde! I am sooo wasted!”

“Dude you’re going to be wasted. That guy is so drunk he won’t even taste you. You’ll probably end up mostly on the floor.”

“Daaang. Hey, who’s that sweet looking thing across the fridge?”

“Oh don’t try talking to her. That’s one of ’em wine cooler chicks. She probably thinks she’s cooler than you.”

“Excuse me? Are you speaking of moi? I am not a wine cooler! I am a hard lemonade! I can be enjoyed by all types, not just lightweight blondes”

“Well come on over here so I can enjoy ya, sweet thang!” 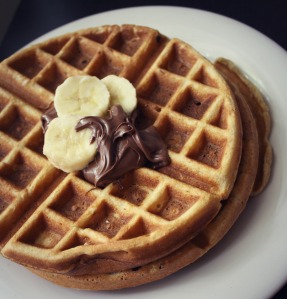 So, last weekend I woke up in a reminiscent mood and was thinking about this awesome waffle hut my roommate and I used to go to in Portland all the time. At Flavour Spot, you can get all sorts of crazy toppings on your waffles: nutella, bacon, powdered sugar, all sorts of goodies. They fold them up and the toppings get all ooey and gooey and delicious. They say something about being the original Dutch Taco Shop or something. Great, Now I was craving waffles.

After some digging in our cupboards, I discovered that we still have a waffle iron. It hasn’t been used since the dark ages, but it’s still there. So I texted my roommate and told her that this Sunday we were going to do a waffle date. She’d have waffles in Michigan, me in Idaho.

Now I just needed to get Nutella and some good Jam. I was planning a Nutella, berry jam, and banana waffle. It would be marvelous.

Fast forward about a week when I realize that I need to find an eggless waffle recipe (Mom is allergic to eggs). So, I start looking on Saturday night for a recipe that has ingredients I have at home because I don’t want to go to the store. No dice. Most of them are vegan, and I don’t have regular milk, let alone almond milk. We don’t even have evaporated milk, which is what mom’s waffle recipe calls for. There’s not even powdered milk in  the cupboard.

I really don’t want to go to the store, so I start looking for alternatives. What could I use to substitute for milk? I’m looking in the baking cabinet, which also happens to be the liquor cabinet. Bailey’s Irish Cream. Hmmmmm…. I ask mom what she thinks. It could work. I shake the bottle. There might not be enough. Of course, the cap is sticking to the bottle, and it takes me telling the bottle that I’m going to throw it away in order to get it open. Finally I get the cap off and pour the remaining Bailey’s into a measuring cup. I need a cup of liquid. I have… END_OF_DOCUMENT_TOKEN_TO_BE_REPLACED