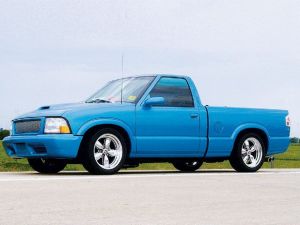 After the traumatic experience of watching my car burn to a crisp on the side of the road, it’s a wonder that I wanted to drive again at all. But I still needed to get places, and an automobile seemed a lot more convenient than a bike or just walking everywhere.
And so the search for an affordable vehicle began again.

This time less than a month passed before I heard from my mechanic. He was actually looking to sell one of his personal vehicles, since his wife was tired of having seven cars and trucks lying around the place. He had a nice little GMC truck, would I be interested? I went to check it out, and instantly fell in love. The truck was a beautiful light blue. He was perfect.

Dale warned me that the truck had a four-cylinder engine and was a bit wimpy, so I shouldn’t rush intersections while I had the air conditioning on. My friend Sydney took me to get my truck and get the appropriate paperwork filled out. We decided right then that my truck needed a name.

“OMG He’s Gay!” Sydney exclaimed! “His name should be Lance! After Lance Bass, because he’s pretty AND gay! And Lancelot, cause knights are awesome!” It was decided.

Later, I told my mom, and she was skeptical. “Lance?” That doesn’t sound like a name you’d choose.”

“Well, I thought about Freddie for a second… but Lance is perfect. But Freddie could be after Freddie Mercury! and Freddie Prinze Jr! One is gay and the other pretty! hmm… Oh! I know, I’ll call him Frederick Lancelot the Third! Since he’s my third vehicle. He can be Freddie or Lance for short depending on my mood.”

A beautiful friendship has blossomed between Freddie and I since. In the past six years he had become dented, but they scars just add character to his beautiful blue exterior. He has transported me safely on many roadtrips, and in return I have tried to take care of him best as I can.

“Hopefully he doesn’t succumb to a fiery death like Thelma” I tell Beth and Katy one night at our favorite coffee shop.

“No, that’s been done. Freddie is doomed to drown! You better learn what to do when your car is submerged in water! or if you’re caught in an avalanche!”

And so I have.